Cutting down on alcohol this month? See top tips.

A depressant drug that slows down the central nervous system. Alcohol consist of water and ethanol, produced by the fermentation of fruits, vegetables or grains. The strength of alcoholic drinks is shown on the label by a number followed by ‘Alcohol % vol’, or ‘% ABV’, (Alcohol By Volume). The higher the percentage, the stronger the drink. Units are also used to compare the amount of alcohol in different drinks. 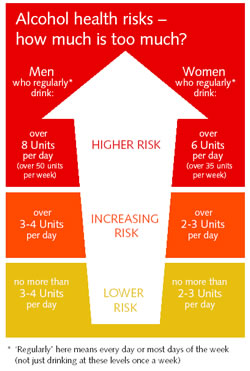 The Royal College of Psychiatrists has recently said people over 65 should drink a maximum of only 1.5 units of alcohol a day. That is the equivalent of just over about half a pint of beer or a small glass of wine. In their report they argue older drinkers are less able to process alcohol and the drink might also interact with medication they may be taking for other ailments. It warns current advice – 14 units of alcohol for women and 21 for men each week – is based on work with young adults. They report there is a growing problem with substance abuse among older people, who they describe as society’s “invisible addicts”. The report says a third those who experience problems with alcohol abuse do so later on in life, often as a result of big changes like retirement, bereavement or feelings of boredom, loneliness and depression. But the extent of the drinking is hidden because unlike younger drinkers, more older people drink in their own homes, the report suggests. The problem is exacerbated by the widespread use – and misuse – of prescribed and over-the-counter medicines among elderly people which can interact badly with alcohol. Compounding the problems are the changes our bodies undergo as we get older which mean we are less able to cope with the effects of alcohol.

We would like to develop a new course – Alcohol and Older People. If you’re needing this type of training, we’ll give you a 50% discount of the standard training rates. Help us to help you.

Alcohol can be a useful form of social lubrication and there is some evidence that a glass of red wine every now and then can help protect against coronary heart disease, but for some people this glass or shot or bottle of beer becomes something that they can’t get through the day without.

The CAGE questionnaire can help work out if your alcohol use is concerning.

If you answer yes to a few of these it might be worth having a chat with a professional, or exploring alcohol concern’s website (www.alcoholconcern.org.uk for more information.

Alcohol cannot be sold without a licence. It is against the law: