There are several forms of cannabis. 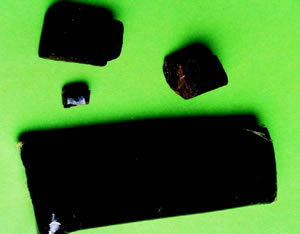 Resin
‘Resin’ – a solid block which can be black and looking like liquorice, to a brown block looking like mud (also called hashish or hash). It is the probably the most commonest form of cannabis in the UK. It’s quite often soft and squidgy. 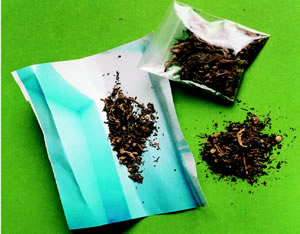 Grass
Leaves, stalks and seeds is called ‘grass’. Cannabis oil (not pictured), is hardly ever seen in the UK. It is dark and sticky, looks like tar, and comes usually in a small jar. 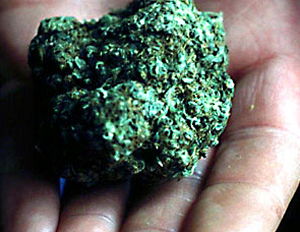 Skunk
Skunk is a particularly strong smelling herb form of cannabis. It is a subgroup of grass, and is particularly potent. Drug workers are usually more concerned about the risks associated with using skunk, compared the the other forms of cannabis.

Whatever the form, cannabis can be rolled (usually with tobacco) in a spliff or joint, smoked on its own in a special pipe, or cooked and eaten in food.
It is a depressant that alters perceptions, derived from a bushy plant, found in most parts of the world and easily cultivated in Britain.

According to DrugScope, there has been some indication in recent years that street dealers have moved to metric measurements to weigh sales.

Is it the real thing? It’s been know that some people sell blocks of mud, stock cubes and garden herbs. The most unpure cannabis is called ‘soap bar’. It’s contaminated with all sorts of things. This makes it cheaper but it’s a false economy really as it is often harder to get stoned.

Paraphernalia / what to look out for

Some research has shown that cannabis may worsen mental illnesses like schizophrenia. It may also slow down any recovery from these illnesses. If you’ve got a history of mental illness in the family you should think very carefully about getting stoned. Cannabis can cause a range of mental health problems from short lived and more common problems such as anxiety and paranoid feelings, to less common difficulties with actual psychotic states that may require medical treatment. These problems may fade away over several days after stopping using cannabis but occasionally may require a stay in hospital.