What are the main dangers from drug use? 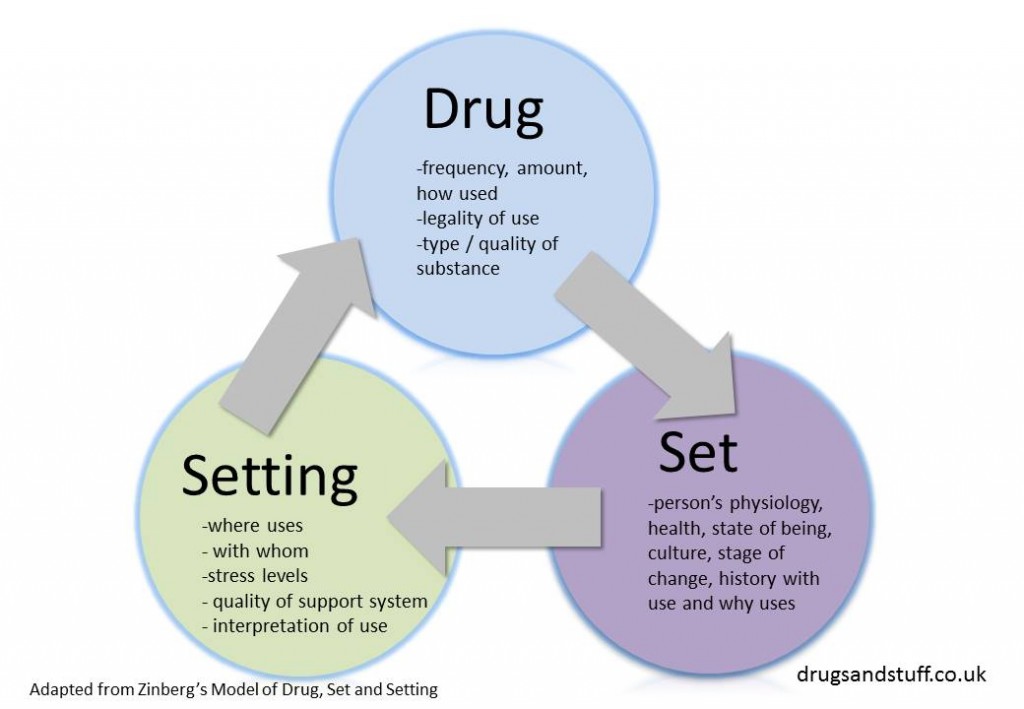 Some people think everyone who takes drugs will end up dead. Others, and especially some young people, seem to believe that drug use is one big laugh and not that dangerous. Or if it is dangerous, it’s dangerous for someone else.

The truth is somewhere in between. Drug use can never be 100 per cent safe but it is not always as dangerous as many people believe. The dangers of drug use depend on the ‘drug’ used, ‘set’ and ‘setting’.

The basic principal is that drug dangers are the result of interactions between ‘drug’, ‘set’ and ‘setting’.

All drugs are not all the same. Different drugs have different dangers associated with them.

Some drugs (such as alcohol, heroin and tranquillisers) have a sedative or depressant effect which slow down the way the body and brain function. They can have a numbing effect that produces drowsiness if a lot is taken. Other drugs (such as amphetamine, cocaine, crack and ecstasy) have a stimulant effect giving a rush of energy and making people more alert. A third group of drugs (such as LSD and magic mushrooms and to a lesser extent cannabis and ecstasy) have a hallucinogenic effect. This means they tend to alter the way the user feels, sees, hears, tastes or smells.

Depressant drugs like alcohol and heroin can lead to fatal overdose if a lot is taken. They can also affect co-ordination making accidents more likely. Use of some depressant drugs may also lead to physical dependence and withdrawal symptoms.

Drugs that speed up the central nervous system can produce anxiety or panic attacks particularly if taken in large quantities. They can also be particularly dangerous for people who have heart or blood pressure problems.

Hallucinogenic drugs sometimes produce very disturbing experiences and may lead to erratic or dangerous behaviour by the user, especially if they are already unstable.

And of course some drugs are legal and others are not. Being arrested and getting a conviction can lead to all sorts of problems.

The dangers of drug use may also depend on:

Drug dangers also vary with the method used to take them:

The effects and dangers of drugs are influenced by many things. Personal factors involving the person who is using the drugs can be just as important as the drugs being used.

The drug experience and the expectations of the user are important. Many young people experimenting with drugs for the first time will be unsure about what to do or what to expect. This ignorance and lack of experience can itself be dangerous.

The mental or psychological state of the drug user is very important. The mood people are in when they take drugs influences the effects and dangers of drug use. If they are anxious, depressed or unstable they are more likely to have disturbing experiences when using drugs. They can become more anxious and disorientated, possibly aggressive, ‘freak out’ and do crazy things or take too much etc. As a general rule someone who is happy and stable is more likely to use more carefully and not be so badly affected.

Other things about the person which may effect drug dangers include:

The place where drugs are used and what people are doing at the time can influence how dangerous it is. For example, some young people take drugs in out-of-the-way places that are particularly dangerous like canal banks, near motorways, in derelict buildings etc. Accidents are much more likely in these places, especially if the user is intoxicated. Also if anything does go wrong, it is unlikely help will be at hand or that an ambulance could easily be called.

Even if the setting is not in itself inherently dangerous there may be other types of risks associated with the place of use. Using or taking drugs into school has led to substantial numbers of young people being expelled from school with drastic effects on their future careers.

Driving a car or bicycle or operating machinery while on drugs, will greatly increase the risks of accidents.

Drug use can lower inhibitions, increasing the likelihood of sexual encounters. Safer sex – e.g. by using condoms – will be much more difficult if the person concerned is intoxicated. The risks of unwanted pregnancy, HIV and other sexually transmitted infections could be increased if people have sex while high on alcohol or drugs. Surveys have found that many young people have sexual encounters while under the influence of drugs, particularly alcohol and/or cannabis.

Another setting danger is that of people over-exerting themselves when using ecstasy. Ecstasy gives a buzz of energy and is often used in clubs while dancing non-stop for long periods. In some situations people have danced for hours without a break in hot, crowded environments. They run the risk of becoming dehydrated and getting heat exhaustion. In some cases this can be very dangerous and it has led to a number of deaths. “Chillin out” having a break from dancing, cooling off and sipping or drinking water or fruit juice at regular intervals (not alcohol as it further dehydrates the user) – reduces these risks.

In addition people may experience people problems with drug use because of other people’s perceptions and responses to them. Examples include conflict in family and other personal relationships, getting thrown out of school/ college or work, getting a criminal record, getting into debt to pay for drugs, violence associated with drug dealing etc.

This explanation is from www.drugscope.org.uk

Set and setting describes the context for psychoactive and particularly psychedelic drug experiences: one’s mindset and the setting in which the user has the experience. This is especially relevant for psychedelic or hallucinogenic experiences. The term was coined by Norman Zinberg, and became widely accepted by researchers in psychedelic psychotherapy.

Read about why do people use drugs.